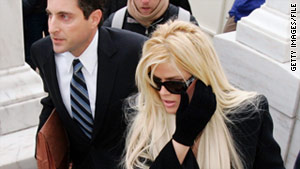 HOLLYWOOD, CA – Yesterday night, this writer, who barely if ever flicks on the TV, due to lack of time, and interest, turned on the box last night to tune in to Anna Nicole, on Lifetime.

After giving my two cents in my last post about the life of Anna Nicole and defending her, after reading a horrible bash written by a reviewer who previewed the biopic that first aired last night, I am now able to don my reviewer hat, and put in my two cents (or more) about the show itself.

My first thought is the actress who portrayed Anna Nicole, did do a phenomenal job, as she transitioned through the many stages of Anna Nicole, from a little girl named Vickie Lynn, to a superstar.

My criticism, however, is exactly what I suspected would happen, as written in my previous post: there were some details of her life portrayed, which some of them, cannot be fully backed by truth. And some of them are conversations between she and her son, Daniel, only, which we will never know the full details, or if they even happened at all.

Some of the show, had twinges of hearsay in the scenes…so here comes a spoiler alert.

We see Anna Nicole’s son, Daniel, reach into her purse, and take out some pills while his mother is sleeping in the hospital bed, after giving birth to Dannielynn.

Anna Nicole wakes up, and she finds Daniel curled up in the chair. She goes to move him with her hand, after he does not respond to her voice, and touches him, pulls away, then screams, after finding him dead.

The first inaccuracy with this picture, as silly as it sounds, is, when one looks at the room in the film, versus the photos taken of Anna Nicole, Daniel, and Dannielynn, there are gross inaccuracies. First, the room color in the photo, taken by Howard K. Stern (Anna Nicole’s lawyer and partner), is an off-white. In the film, the hospital room is a powdery blue, and Dannielynn is wearing one of the baby caps that the hospitals give to their newborns. No hat on the baby in the actual picture. And the Daniel character wore a cap and t-shirt that differed slightly from what was worn in the photos.

My feeling is if even these little details cannot be properly recreated, with all the magic in Hollywood, that is not a good sign.

Even more importantly, we do not know for a fact that Daniel swiped these pills from his mother. Again, this writer (for this moment, reviewer) suspects that there was foul play involved in Daniel’s death, and later, Anna Nicole’s. Daniel was known as a straight-A student, shy, and not into drugs and alcohol. He was bound to inherit a lot of money as Anna’s sole heir. She dies only five months later. See where I am going with this?

In Wikipedia it is written, “On an episode of True Crime with Aphrodite Jones, Larry Birkhead stated that security in the house indicated that Daniel had stolen his mother’s methadone.”

First, what is wrong with that statement? Larry Birkhead was not even there, secondly, if security knew he stole methadone, would they have not stopped him?

This is what scares me about Hollywood are inaccuracies like this, which in turn, this is how rumors get started. Using hearsay to create a film that is supposed to be true, is not being accurate.

Another one (spoiler alert!) is the filming of the clown video, where Anna Nicole is playing with a little girl and baby doll. An original copy of this video of the real Anna Nicole is below. The creators of the film had a few things wrong, from the look of the little girl with Anna Nicole (who has in actuality, some beads in her hair, when she did not in the film), to some of the dialogue, and actions (in the film, Anna Nicole carried the baby doll inside, where, in the actual footage, she walks in the house alone with her dog tagging behind, as Howard K Stern, filmed her. She met the little girl indoors and tended more to the baby doll, as it was on a changing table).

There are other details of Anna Nicole’s life as well portrayed in the film, that this writer still needs to investigate the accuracies. Simple Google searches of these particular events (such as Anna Nicole making out with another female in an elevator, only to be caught by her son, Daniel, as the doors opened), were not located through an Internet inquiry.

The film also shows a young Anna Nicole, then known as Vickie Lynn, speaking to a Marilyn Monroe-esque image in the mirror, who introduces herself to Vickie Lynn as Anna Nicole. On the flip side, we see Anna Nicole in several scenes, looking into mirrors and glass, and finding a young Vickie Lynn staring back at her. This is, of course, for entertainment purposes only, similar to a movie made about Marilyn Monroe, with Ashley Judd as Norma Jeane and Mira Sorvino as Marilyn Monroe, in Norma Jean & Marilyn, with the younger self addressing the older self. The clip of this is below, and again, is a work of fiction, based on someone’s life (Marilyn was found dead in her bedroom, nude, clutching a telephone, did not die in an ambulance. Plus, she had no alcohol in her system at the time of her death).

Some other details the filmmakers of Anna Nicole sidestep, whether deliberately, or accidentally, is the whole aftermath and circus, with Anna Nicole’s death. How she died and who enabled her death, are still in the court system this day. Click here to view a court document from this matter, filed March 28, 2013.

This situation is something else that can be delved into further, and will be, on InsideScene.LA, and, as is said in Hollywood, “to be continued”…

Until then, if you have a couple of hours, pull up a seat, grab some popcorn and your remote, and watch Anna Nicole, and share your insights here. We look forward to what you have to say.