Take Things Written About Anna Nicole With a Grain of Salt; Remembering Anna Nicole in a Way She Should Be

HOLLYWOOD, CA – It has been over six years since her tragic death, but Anna Nicole Smith is being personally bashed by a large publication (which will remain unnamed, and will not be linked to here, so as not to promote the lies within the article), in typical tabloid style, in a review about the biopic that Lifetime is airing on her life today, Saturday, June 29, the simply titled, Anna Nicole.

It is no secret Anna Nicole Smith had her issues; yet, and unfortunately, some aspects of her life were very controlled by those around her, namely her doctors and attorney, especially in the final months. They controlled her through the pills they doled out, even forging prescriptions, and putting them under different names, to keep her drugged up.

Why did they do so? Well, easier for them to have kept her “controlled” through “controlled substances” in order to control her pocketbook, and her life overall.

Many, including the reviewer that wrote the particular article referenced above, fail to acknowledge this, or even give it a mention, and instead focus on the character that Anna Nicole Smith created, not the woman herself. Anna Nicole Smith’s television show was obviously staged, because she was different on-camera than she was off, as will be presented in this article.

As a journalist, I have had the opportunity to meet reality T.V. stars who have a persona onscreen that is a far cry from who they truly are. Where you expect a larger-than-life and obnoxious person, in the flesh you find a sweet, soft-spoken, and gentle person.

Anna Nicole Smith was not who she was on television.

The unnamed reviewer of Anna Nicole, on the other hand, takes cheap shots at a lady who is no longer able to defend herself, basically referring to her as a low-class call girl and, stating how Anna Nicole humiliated her son with her actions.

Tragically, Anna Nicole’s son, Daniel, died in the same hospital room that she was sitting in, after the birth of her daughter and his sister, something that devastated Anna Nicole for the rest of her final months on earth. The author of this story feels Smith’s death, as well as her son’s, were both suspicious and involved foul play (a whole other topic to explore), and, instead of taking the high road, the journalist in the other piece, resorts to attacking and more attacking. Not once did that publication acknowledge the drama swirling around both of these suspicious deaths. 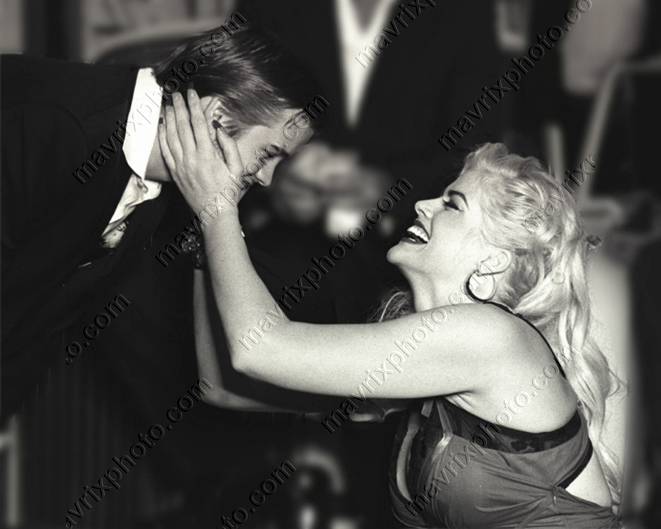 MAVRIXPHOTO.COM Anna Nicole and her beloved son and best friend, Daniel. The 20-year old was Anna’s “pride and joy and an amazing human being.”
Photo Courtesy of Trimspa.

Is it coincidence that Daniel, Anna Nicole’s sole heir (in spite of his death, she never changed her will, leaving everything to him), dies from a drug overdose, and then she dies about five months later?

This writer does not believe so.

Even more dishonorable, was that a minor child, Anna Nicole Smith’s daughter, lives and thrives, and is a stunningly beautiful young lady. To read that the writer of the other publication would comment about this child in a negative manner, making insinuations that Dannielynn was fortunately not born with physical issues, is disgraceful as well. Yes, thankfully the child was born without issues, however, what if Anna Nicole’s daughter was to read this piece, and read about what was so horribly written about her mother, brother, and herself?

He attached a photo on Twitter of Dannielynn eyeing up her mother with a set of kids’ binoculars, as the well-known Guess queen (the company that Dannielynn also now models for) was pictured glamorously on a store shelf, overlooking the store.

This is the human side that some publications, and writers, will sweep under the rug; the pain and the loss that Dannielynn will experience with the passing of both her brother and mother will be for a lifetime, while that writer chose to engage in snark about Anna Nicole.

To put these two famous ladies into the proverbial Hollywood box, indicating that they were both blondes who boozed and drugged it, as that particular reviewer did, is wrong. Both women were trapped in a system, as some stars have been, where they have become puppets for those looking to exploit them (in both cases, doctors and other professionals, took control), with mind-controlling substances, in order to emotionally dominate them, and their pocketbooks. Neither of these women wanted to die, and both endured a number of challenges in their lifetimes, and it is evident from those who know their stories well, both would have triumphed over these difficulties they faced had they lived.

A note from this writer: I have not previewed Anna Nicole the biopic, and from what I have read, and seen, the actress who plays the star, Agnes Bruckner, went to great lengths to do so with dignity and love. Click here to view the video about the painstaking transformation she made to become this unforgettable blonde.

There have also been many attempts to recreate the life of Marilyn Monroe on television and the big screen, and some actresses have done phenomenally, and others have done her injustice. One of the most recent was My Week With Marilyn. Michelle Williams, like Agnes Bruckner, did an admirable job becoming the woman, yet, there were flaws in the film about Marilyn Monroe, because of the myths that have been created about her life.

That is the same with Anna Nicole Smith.

This writer here suggests one proceed with caution in watching this biopic, based on the untruths and stigmas still flying around about Anna Nicole all these years later. As the great Benjamin Franklin once said, “Believe none of what you hear, and half of what you see.”

And movies are, above all in many cases, created to first of all, sell tickets, and secondly, entertain, even if there is some fiction mixed in with what should be truth.

In regard to the slamming of Anna Nicole: have we not all done something in our lives that others may look down upon for one reason or another? Anna Nicole, like the rest of us, did, and her life was larger-than-life, and an open book. A viewer of this biopic should be cautious in watching it, because fiction can outshine truth in Hollywood. The negative is being focused on, and myths are being created, instead of remembering, she was a human being who made mistakes. Even more, she did some things that were things she could be proud of.

One quality was that she loved animals. Anna Nicole was a known activist, even having shared her image in a Marilyn Monroe-esque takeoff of “Diamonds Are a Girl’s Best Friend,” for PETA, against the fur industry. The video of her ad is below.

One of her other triumphs was she had an uphill battle with her weight, which she conquered, and became the spokeswoman for Trimspa, making a victorious comeback. With Trimspa there are many videos out there, where Anna Nicole is playing a “role.” This one, below, however, one sees the real Anna Nicole, which is different than the part she played in the commercial, as well as on her reality show.

Above all, in spite of the television reviewer’s accusations, Anna Nicole loved her children endlessly. That is obvious from the photo attached in this article of the three of them. Also, based on a sad photo, which is easily found on the Internet (and this publication will not republish), of Anna Nicole, cradling the body of her just-deceased son, Daniel, in a hospital bed. This was an image that her attorney took as well, another something that is suspect (we won’t even get into the other offending images he took of Anna Nicole in her vomit).

It is also clear from this video, taken of Anna Nicole Smith and son Daniel, when he was a young child.

In the video not only is Anna Nicole well-spoken, and positive, she is also stunningly beautiful, not typically what the mainstream media likes to show of her, and instead, focuses on what could be considered the most morally grotesque.

And what Anna Nicole says about her son is absolutely lovely.

She romps through a field at her ranch, something she said she has wanted all of her life, and says, “I love the fact that I can take care of my son. You know I’ve taken care of him since he was a newborn, and that’s very important to me.”

Anna Nicole Smith raised her son Daniel, as a single mother, an admirable feat in itself, and not easy for many mothers, especially ones who endured difficulties in their youth, as Anna Nicole did. 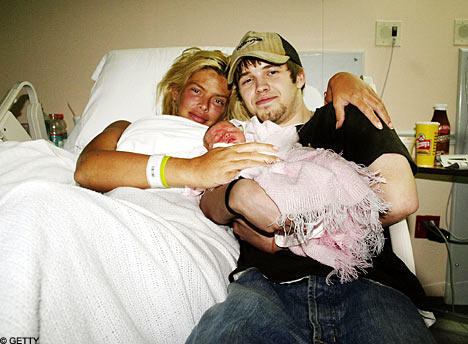 Anna Nicole with Her Two Children.

Smith describes her offspring as beautiful, with blonde hair and green eyes like her’s, and is tall like she is.

Their mutual joy as they horse around on the ranch, with piggy back rides, and fun, is evident on the video. She is not distant, or strange to her son, as the negative reviewer in the one article, has decided to hone in on.

Anna Nicole Smith especially notes on the video that helping her family out is the best thing that could have happened to her.

“It’s special to me because I really believe in family,” she adds.

In another video where Daniel admits his shyness on camera, his mother lovingly teases him at first, and then coaxes him when he confesses he is nervous.

In her final five months, she doted on Dannielynn as any devoted mother would.

Dannielynn is seen in this video simply being adorable for ET. One sees the reverence and devotion she has for her mother, as she applies a coating of lip gloss to her photos, and plants kisses on them.

Anna Nicole first airs on Lifetime at on Saturday, June 29 at 8 p.m. It shows again on June 30, July 1, and July 2. Click here for all showtimes.

One thought on “Take Things Written About Anna Nicole With a Grain of Salt; Remembering Anna Nicole in a Way She Should Be”